In April 2017, CCHR opened its Psychiatry: An Industry of Death traveling exhibit in Vancouver, Canada, right in the Downtown Eastside (DTES), an area plagued by rampant drug abuse and psychiatric programs.

Many First Nations people who came to the exhibit had suffered the loss of loved ones by suicide. Their suicide rate is over twice the national average; however, ironically, they also receive more “professional” mental health help (i.e. psychiatric) than the national average. Compared to the 8 percent Canadian average, 17 percent of aboriginal people are on psychiatric programs.

It became alarmingly clear that—despite a higher degree of mental health care—the soaring suicide rate showed the ineffectiveness of these psychiatric programs and the need for the First Nations people to find real solutions.

A First Nation carving artist shared his story of losing his son to suicide six months earlier. His son had been on psychiatric drugs. The child of a close friend of his had also recently committed suicide while on psychotropics.

CCHR Vancouver’s Executive Director, Sharon Werner, herself of First Nation heritage, was invited to speak on Vancouver Co-op Radio. She then briefed Chief Tommy Curley, the hereditary chief of the Ehattesaht First Nation people of nearby Vancouver Island.

The chief wrote a cautionary letter to his people, saying, “Psychiatry does not follow our tradition and the over-drugging of our children is evidence. I urge all my people to seek traditional healing for our minds and souls, and to see real responsible medical doctors for a competent second opinion in all cases.”

A second Psychiatry: An Industry of Death traveling exhibition opened in February 2018 with Chief Curley officiating at the ribbon cutting. Three seminars showed the CCHR documentaries The Marketing of Madness, The Age of Fear and The Hidden Enemy.

Such was the impact that, in less than a year, Canadian Member of Parliament Jean Augustine commended CCHR’s work, stating, “This work certainly saves lives.”

CCHR groups the world over march and demonstrate in protest of psychiatric abuses, as this one did in Sarasota, Florida.

For CCHR to accomplish its mission, we depend on individuals across the planet who are dedicated to eradicating abuses in the field of mental health. CCHR’s network of chapters is ever growing and we invite you to join us.

Get materials from CCHR.org for your activities and start delivering documentary showings, seminars and petition signing campaigns against ECT and the drugging of children. You can solicit abuse cases and take any of the many other actions to expose the fraud of psychiatry.

To see an example of a stellar CCHR chapter in action, go to scientology.tv where President of CCHR Florida, Diane Stein, takes on the psychiatric industry and their agenda to profit from “treatment” of children and families. Also watch the CCHR documentaries on scientology.tv every Saturday at 6 and 9 p.m. Pacific Standard Time.

Contact us with information about your group and anything else you need. 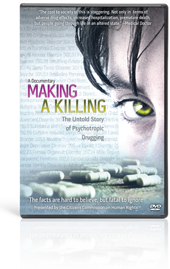