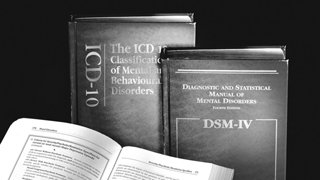 Psychiatry’s diagnostic criteria are literally voted into existence and inserted into the American Psychiatric Association’s Diagnostic and Statistical Manual for Mental Disorders (DSM).  What is voted in is a system of classification of symptoms that is drastically different from, and foreign to, anything in medicine. None of the diagnoses are supported by objective evidence of physical disease, illness or science.

“There are no objective tests in psychiatry, no X-ray, laboratory, or exam finding that says definitively that someone does or does not have a mental disorder.”
—Allen Frances, Former DSM-IV Task Force Chairman

“DSM-IV is the fabrication upon which psychiatry seeks acceptance by medicine in general. Insiders know it is more a political than scientific document…DSM-IV has become a bible and a money making bestseller—its major failings notwithstanding.”
—Loren Mosher, M.D., Clinical Professor of Psychiatry

“The way things get into the DSM is not based on blood test or brain scan or physical findings. It's based on descriptions of behavior. And that’s what the whole psychiatry system is.” —Dr. Colin Ross, psychiatrist

“We can manufacture enough diagnostic labels of normal variability of mood and thought that we can continually supply medication to you…But when it comes to manufacturing disease, nobody does it like psychiatry.” —Dr. Stefan Kruszewski, Harvard trained Pennsylvania psychiatrist, 2004

“In short, the whole business of creating psychiatric categories of ‘disease,’ formalizing them with consensus, and subsequently ascribing diagnostic codes to them, which in turn leads to their use for insurance billing, is nothing but an extended racket furnishing psychiatry a pseudo-scientific aura. The perpetrators are, of course, feeding at the public trough.” —Dr. Thomas Dorman, internist and member of the Royal College of Physicians of the UK, Fellow, Royal College of Physicians of Canada

PREVIOUS
Real Disease vs. Mental "Disorder"
NEXT
Psychiatry Admits It Has No Cures
#BanECT
THERAPY OR
TORTURE
The Truth About Electroshock